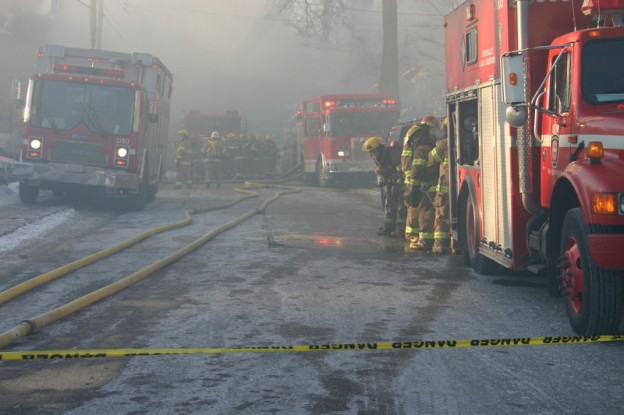 It was during the pre-dawn hours of Sunday, May 4th that firefighters rolled en masse to the scene of a fire that broke out at  the Carnival Bingo Hall, which is located in Laharna Retail Park in Larne, which is part of Ireland’s County Antrim. Just a few minutes after the 4 a.m. call, fifty firefighters were on the way to the scene, manning a total of eight pumping appliances and a large fire command unit.

The overwhelming response to the initial call for emergency fire crews is believed to have made a huge difference in the amount of damage the fire caused to the bingo hall as well as to surrounding retail establishments. According to John Bacon, spokesman for the Northern Ireland Fire and Rescue Service, the fire did not spread to nearby buildings and did not grow out of control. “ It had the potential to be a big fire, literally it didn’t get to develop,” he told reporters. “That’s largely down to the actions of the initial crews in attendance, who made a heightened and sustained attack on the fire and prevented it from traveling too far into the fabric of the building,” he added.

Sources have not yet released the cause of the bingo hall blaze, but a spokesman for PSNI said that it is not believed to be suspicious.

Carnival Bingo Hall is one of several gaming clubs and bingo halls operated by the Bingo Magic Group of Northern Ireland. The club was opened in 2005 and is home to numerous gaming machines as well as a very popular mainstage bingo, which hosts live games several times each week. Carnival Bingo has not yet released information concerning how the fire will affect its regularly scheduled daytime and evening sessions, but concerned players are welcome to contact the club’s management directly on 028 2826 9688. It is also possible to contact the Bingo Magic Group at 028 9266 6103.